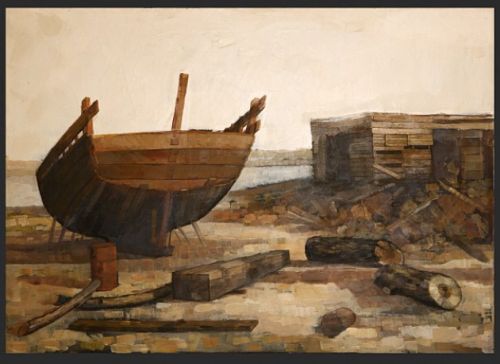 A self-taught Emirati artist, Abdul Qader Al Rais made quite an entry into the art world during his tweens. Right from the beginning his artworks have been critically acclaimed by his fellow artists and critics around the world. His watercolour artworks are mostly inspired by local landscape, scene and heritage of UAE. With more than 10 awards and 15 solo exhibitions, Al Rais is one of the most celebrated and noted artist in UAE.

Al Rais’s signature geometrical motifs—flying squares—made his artworks recognisable even without his initials. The incorporation of flying squares along with abstract calligraphy in his paintings, became his idiosyncrasy and carved a niche for his paintings around the world. His paintings are featured in many palaces and government offices in UAE. His artworks can also be spotted in many local trains, a government initiative to encourage public art in Dubai.

His latest endeavour Past Forward: Contemporary Art from the Emirates is the first major touring exhibition of Emirati art. Past Forward showcases various peculiarities of Emirati heritage and their deeply rooted culture on hospitality. It includes artworks of 25 contemporary Emirati artists. This 18-month long touring exhibition is having its last stop in Bluegrass, USA. This exhibition includes three of Al Razi’s artworks- Al Jalbout (Pearl Diving Boat), Obaid and Mouza, Thekrayat (Memories).

Al Jalbout, represents an integral occupation in Gulf region’s history, pearl diving. The painting shows a sectional structure of the pearl diving vessel. Thekrayat, is a defined scene of rural Fujairah,which homes the oldest mosque in UAE and the only place without a coastline in the Arabian Gulf.

At 64, he is one of the most seasoned artists old enough to making art that depicts the times before the establishment of UAE.